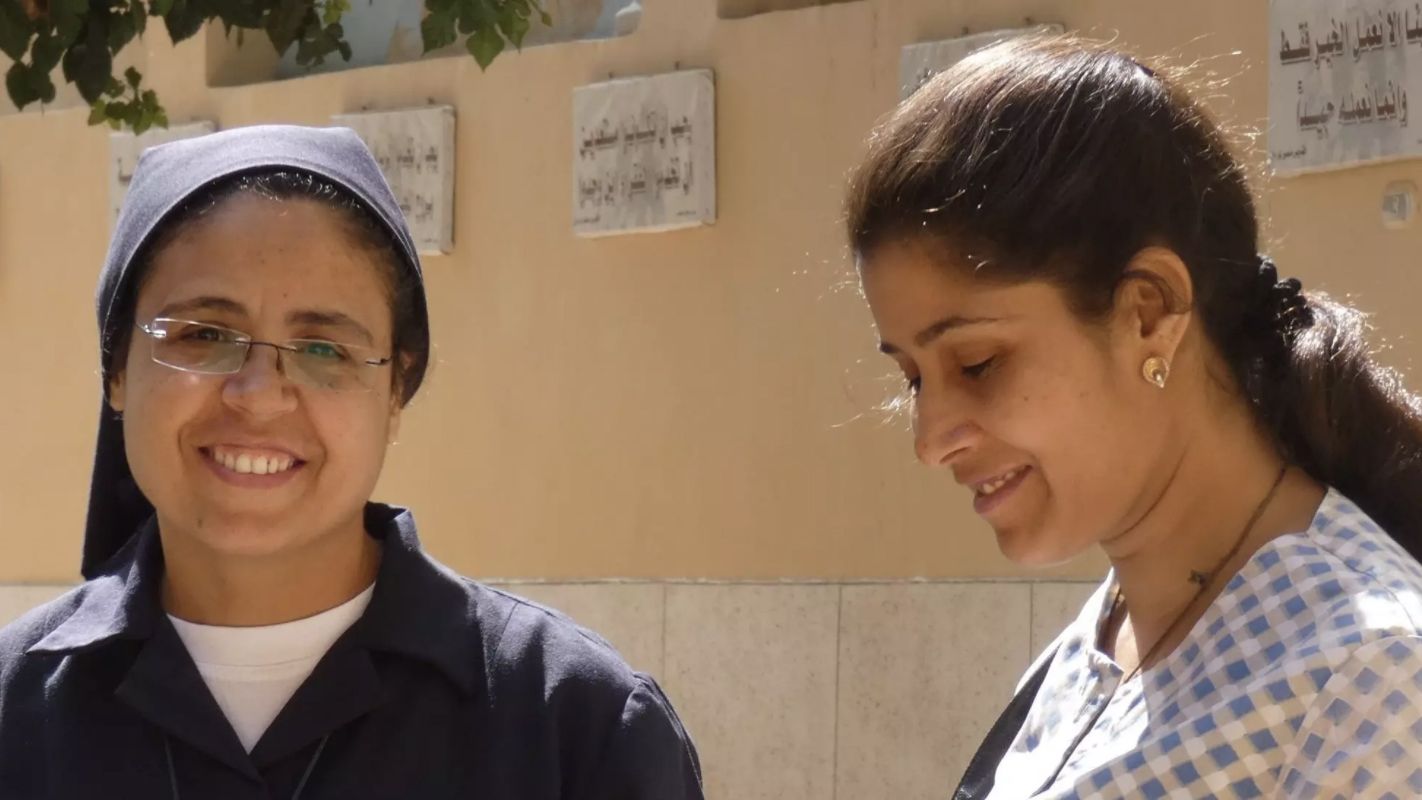 Sisters of the shadow, exceptional women: In Koussieh, the little hands of God
October 06, 2021
Églantine Gabaix-Hialé
Daughters of Charity

« This is where our mission is, in the dust and in the noise, with and alongside the poorest ».

Sr Nada, Lebanese, had not returned to "her" mission since 2005. Then sent to Syria and Iran, she is now back to what she missed so much, the heart of her vocation: to serve and share the lives of those she serves..

Five hours' drive south of Cairo, Koussieh looks like a village: a single tarmac street crosses this town of nearly 100,000 inhabitants, 36,000 of whom are Christians. Thousands of touk-touks honk their horns day and night, carts and a few cars. It rains every 10 years, dust covers everything. At a crossroads, the mission and five nuns of the Daughters of Charity: Nada, Bachayère, Férial, Nadia and Camilla. A haven of life rather than a haven of peace. The noises of the city are absorbed here, the nearest mosque adjoins the nuns' rooms. The house houses a dispensary, a kindergarten, a canteen, women's groups and, in general, all those who want to spend some time in the shade of the tarpaulin erected in the courtyard. Apart from their room, the sisters have no private space. At mealtimes, there is always someone knocking on the door, "It's the only time when people are sure to find us! It is easy to believe them when the Sisters say that this is their most noisy mission in the Middle East.

Sr Nada took over the reins less than a month ago. She goes round the buildings, sometimes discovering some changes: "So here, in this room, was our laundry room". From the smell that escapes, one guesses that it is no longer the case. The door opens on a room transformed into a chicken coop under the still clinging gaze of Saint Vincent de Paul and the doubtful eyes of Sr Nada.

Sr Camilla, a nurse in her early forties, is originally from Sedfa in Upper Egypt. She met the Daughters of Charity at school. "I liked their way of being. Sr Marcelle in Cairo also made an impression on me, her love and mercy towards the employees, her sense of justice. Everyone obeys her because everyone respects her. Why does it work when she herself no longer works? she says with a certain mastery of the subtleties of the French language, "simply love".

Ana comes from a poor background and was not able to study. At the clinic, she has been learning on the job since 2014 as a dental assistant. More than a profession, it is a vocation that she came here to find. Soon, she will leave for the novitiate in Cairo. Watching the sisters live made her want to follow in their footsteps. In Upper Egypt, vocations are numerous.

Between the exemplary nature and the difficulties of daily community life, between ideals and pragmatism, it is not always easy to find the meaning of one's vocation. Nadia was engaged for two months before admitting her interest in religious life. "The fiancé was very nice, but that was not my life! And then, once this choice was made, there were doubts, especially about life in community. Why had I left everything behind for a life like the others? For me, community life was an ideal and it is not always the case, it must be said. It was hard to accept. I would like things to be perfect, but only God is perfect, I only have to do what I can." Sr Ferial, a Syrian, says that she likes to change her place of mission: "It allows me to concentrate on the essential, to detach myself. Sometimes we don't get along with each other, if it's really complicated, we change mission. To serve Christ, it's better not to waste our energy on arguments, isn't it?"

In Menchieh, a little further south of Koussieh, 16 women work in the candle factory initiated by Sr Nadia. "Poverty here is not only material, the girls have to go out of the house where they don't even have an ear to listen to them: this is real poverty." The candles are sold in all the churches in Egypt and the workers have taken over the workshop.

A life of prayer and dedication

Religious life contains its share of intimate wounds, disappointments, doubts and discouragement. When you ask Sr. Camilla what carries her through these moments : "Prayer. Christ is stronger than our tiredness." Same observation for Sr Nadia: "Times of prayer and oraison are essential, we read our day in the light of the Spirit." In fact, their lives are punctuated by these times of prayer, from Lauds to Vespers, from 6.30am to 9pm. In between, they care, educate, teach, advise, cook, clean, listen, have a thousand dedicated lives in one day, with a patience worthy of a Swiss guard. Each has its own liturgy for washing up. Just as each Daughters of Charity community in Egypt has its own rules for playing Rummikub. Some even have reputations as cheaters that follow them around the Middle East, or shall we say ways of playing that are unique to them.

During Vespers, Sr Nada established a ritual. She listed the names of the Daughters of Charity who had died that day, their place and date of birth, vocation and death, written in a large book. They were born in Brittany, in Auvergne, in Poland, in England, in Egypt, in Lebanon, from the middle of the 19th century to the beginning of this century, and died far from home at 25, 50 or 90 years of age. After having left everything behind for reasons that will always remain mysterious to us. Simple lives, given, exceptional.

« In memory of Sr Henriette, met in a leprosarium in Iran in 2005, where she spent most of her life, who died in September 2020 in Lebanon. And of those two games of scrabble we played, where she cheated shamelessly ».